How to Identify a Copperhead Snake 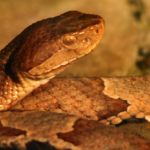 Copperheads are arguably the most recognizable snake breed that calls the United States home. The poisonous snake also suffers from an identity crisis of sorts, as the pattern forged onto its flesh is quite similar to several other species of harmless, non-poisonous slithering critters.  It may be tough to differentiate copperheads from other snakes, particularly if you’re inclined to be freaked out at the site of a snake. However, there are several ways you can identify whether or not that snake that’s creeping up next to your camping party is worth worrying about.

The bite of a copperhead is pretty ubiquitous when it comes to American-based snake bites. It’s estimated that around 5,000 to 8,000 of the 55,000 reported snake bites in the U.S. are initiated by a copperhead’s fangs. That roughly translates to 10 to 15% of all reported bites.

The copperhead’s reputation for having a vicious bite is well-earned. Its mildest symptoms can include unpleasant things like throbbing, tingling, severe nausea, and sharp pains. At its apex, the bit can cause bone, tissue, and muscle damage, particularly if the bite occurs in the hands or the feet.

While a copperhead’s bite is undoubtedly nasty, it’s seldom ever fatal. In fact, the venom produced by this snake may end up doing more good than harm in the long run.  Scientists have discovered a chemical in its venom that could eventually be used to prevent the growth of cancerous tumors in humans. 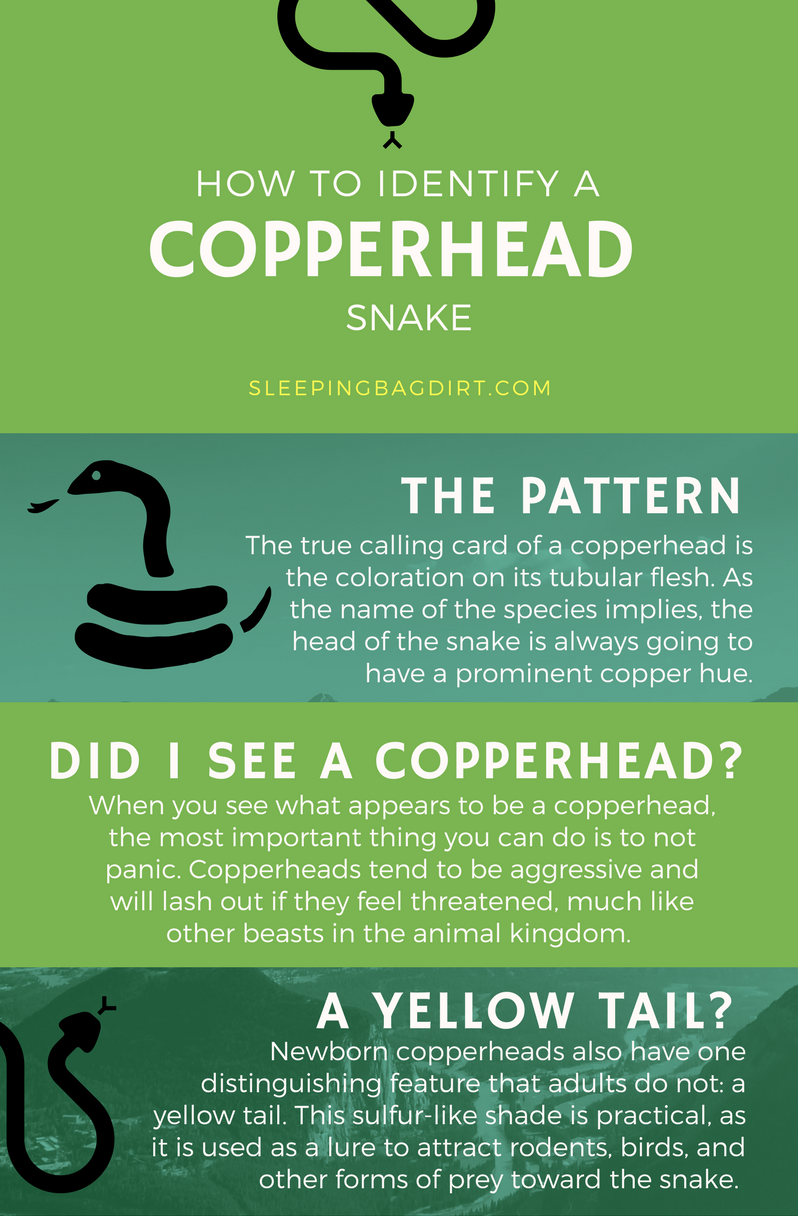 A Good, Live Look at a Copperhead

The best thing you can do to prepare yourself for a potential encounter with a copperhead is to see one of these snakes in action. This video does a good job of covering the copperhead’s basic metrics, from its general personality to its markings. Equipping yourself with these visuals may help you react appropriately should you end up seeing a snake infiltrating your backyard.

The Pattern: The Easiest Identifier 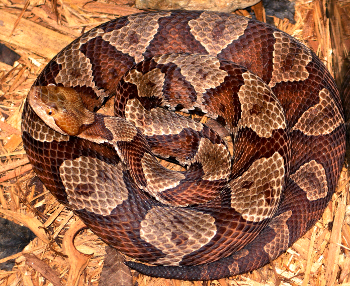 The true calling card of a copperhead is the coloration on its tubular flesh. As the name of the species implies, the head of the snake is always going to have a prominent copper hue. The base color of the rest of the snake is going to range from tan to pink.

The key to differentiating a copperhead from other snakes is found in the reptile’s pattern that rest on its tan to pink body. This pattern manifests itself in hourglass-shaped bands of varying size which are about the color of a chestnut. These bands tend to stretch across the snake’s back and stop at its sides.

This unique pattern and color scheme is completely unique to the copperhead. Other snakes commonly confused with copperheads, such as rat snakes or water snakes, may have similarly shaped patterns or colors. However, these “imposters” don’t carry the exact replica of both identifiers on their backs.

Newborn copperheads also have one distinguishing feature that adults do not: a yellow tail. This sulfur-like shade is practical, as it is used as a lure to attract rodents, birds, and other forms of prey toward the snake. The color fades away once the copperhead matures and is capable of hunting more autonomously.

What to do When You Think You See a Copperhead

When you see what appears to be a copperhead, the most important thing you can do is to not panic. Copperheads tend to be aggressive and will lash out if they feel threatened, much like other beasts in the animal kingdom. If you start acting panicky near a copperhead, it may misread your actions as a threat upon its life and act accordingly.

With a calm demeanor, observe the colors and patterns of the snake’s back. If you know what a copperhead looks like, you won’t have too many problems differentiating the venomous beast from harmless varieties. A good deal of harmless snakes, like corn snakes, rat snakes, and milk snakes don’t look anything like a copperhead.

If you’re still not sure if you have a copperhead on your hands, and if the beast is near enough to see its face, take a look at its pupils. A copperhead snake will have vertical pupils, whereas non-venomous snakes have round pupils. The one exception to this rule is the coral snake, a round-pupiled snake whose bite could cause cardiac arrest if left untreated.

Be Mindful of Baby Copperheads

Baby copperheads may look harmless because of their small size. In a way, you may even consider them to be cute. Yet despite their quasi-cuddly appearance, don’t be fooled: even a little guy can cause some serious pain if it bites you.

If you live in an area prone to copperheads, you may want to train your children on how to recognize baby copperheads, and instruct them to stay far away from them as possible. You may also want to make sure your backyard is snake-free before allowing your dog outside, as they may have no problem confronting a baby copperhead even though they shouldn’t.

Don’t attempt to handle or kill a copperhead in the wild if you encounter one. If you identify a copperhead on your property or out camping, call your local Animal Control unit immediately and let them handle the removal or just leave the be. The snakes actually play an important role in helping to control the spread of rodents and vermin, so they should be left alone. If you bring your dog camping make sure to keep him or her clear of any snakes, after all the last thing you want while out camping is your best friend to get bit by a snake!

Even though copperheads – and snakes in general – tend to give us the heebie-jeebies, it’s important to bear in mind that they don’t intend to deliberately seek us harm. If you don’t mess with them, they won’t mess with you. If you stick to that rule of thumb, you may find it easy to co-exist with the critters, even if said critter is a copperhead.

Sleeping Bag Dirt is a community of camping enthusiasts that loves the outdoors. Our team loves pushing their limits on their adventures. For more info about what we do, read our team profile.